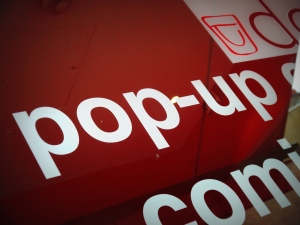 “Poet Audre Lorde said: “There are no new ideas. There are only new ways of making them felt.” So, with this in mind, I’d like to tell you about the history of Fabric’s ‘adventures in property’ here in Bradford.

Our first foray into using empty spaces for the arts was meant to be brief and goes back to when Bradford was made the first UNESCO City of Film. As part of the official launch we were asked to create a temporary cinema in an empty shop in Bradford’s Centenary Square. A meeting was set up with the owners of the Centenary Building to see whether they’d consider letting us ‘borrow’ one of their empty shops for the weekend. This seemed like too good an opportunity to miss and so we pitched a proposal for a longer ‘tenancy’ with the idea that we might use the space to showcase a few local artists. They said yes and two and half years later its still running, having shown the work of more than 300 artists and organisations to more than 10,000 visitors.”

The use of empty shops and other spaces in Bradford gets a good write-up in an article on The Culture Vulture blog.

Made by Dan Thompson Studio

"A resource for pop-up fanatics and business owners alike" A Smart Guide To Utopia, 2012